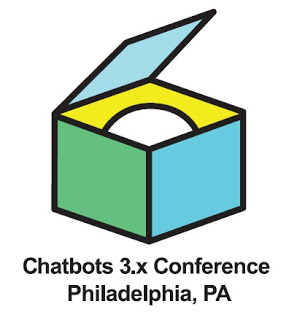 The legends and current elites of AIML and Turing AI (not necessarily disjoint groups) met for their yearly gathering at Seed Philly, a Philadelphia tech startup incubator, located in the heart of Center City.

Dr. Richard Wallace, Loebner Prize Winner 2000, 2001, 2004 and father of AIML, talked about the new AIML 2.0 Specification that focuses much on making AIML more succinct, while maintaining its simplicity. He stated that it currently took about 10,000 AIML categories to create a believable character. ALICE for instance has about 100,000 categories and the PROFESSOR, a bot with one of the largest AIML knowledge bases, has about 580,000 AIML categories. Writing that many categories is not only very time consuming (experienced AIML authors may be able to write one category per minute) but also requires a memory capacity, not  available on many embedded and mobile devices. AIML 2.0 therefore tries to make AIML more efficient, allowing the creation of a believable character with as little as 1/6 of the categories needed before.

Mohan Embar, 2012 Loebner Prize Winner for his bot entry Chip Vivant, gave an informal talk entitled Moonshot or Low-Hanging Fruit, sharing his motivation for creating his bot (which is not based on AIML) and encouraging other bot authors to question their own motivation and to stay focussed.

He currently works on creating a more empathetic and engaging bot that is more than simply reacting. He suggested a project that would allow to program a bot with a persons’ personality, core-values, views, achievements, etc. which would be available after the persons’ death, for relatives and friends to still communicate with the deceased.Jeremy Spiegel, MD, Cascon Bay Medical, was making the case for the use of Chatbots in Psychiatry, Dave Morton, Lead developer of the Program-O AIML-Interpreter, talked about the improvements he is currently making on the PHP/MySQL based engine, and Wolf Paulus, Inuit Inc., talked about Voice Enabling Chatbots.

The event ended with an invigorating talk from the entertaining, always challenging, and thought provoking Chris Shaw. His focus was more on visual expression rather than artificial intelligence, showing many of the cutting edge visual presentations of avatars, like Zoe . Chris emphasized the importance of tell a compelling story, a bots needs to be able to play a role in an interactive drama and always needs to be able to create that moment of surprise. He concluded with stressing the significance of sound quality of a natural voice over any visual presentation.

Seeing the legends of AIML and Turing AI being all invigorated and out in force, confirmed the intuition that everyone at the conference seemed to have had: all the parts and pieces are finally coming together, to create an believable virtual human.

There was a spirit of optimism that many of the more experienced could only compare with the time shorty before the word-wide-web popularized the Internet.