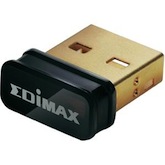 The extremely small EW-7811Un USB wireless adapter looks like the perfect WiFi adapter for the Raspberry Pi. Not only is it tiny and relatively inexpensive, it also seems capable enough to be a great companion device for the Raspi. While elinux still shows that some users report timeouts trying to initialize the module, I cannot verify this with 2012-12-16-wheezy-raspbian.

WiFi is not really necessary for the Raspberry Pi. It already comes with an ethernet port, provides RS-232 (aka serial-) connectivity, and has two USB ports. However, in case you wanted to add WiFi to the Raspi, this little adapter seems to be as good as any. Here is why:

more than enough reasons to cut the cord and add WiFi connectivity to the Raspberry Pi.

After performing the usual initial configuration in raspi-config, using WiFi Config (a GUI tool sitting at the desktop when starting LXDE with startx) is by far the easiest way to get the Edimax EW-7811Un configured.

But let’s quickly run through the steps of creating that bootable SDCard before dealing with the actual WiFi issues:

On a class 10 SD Card, the whole process shouldn’t take much longer than 70 seconds maybe. Insert the SDCard into the Raspi, power up, boot, and use the on screen menu:

In case you need to do this over a network, the Raspberry Pi’s default hostname is raspberrypi. I.e.
ssh [email protected] .. the pasword is raspberry

Edit the host name in these two locations:

With previous wheezy builds, I had to install the realtek firmware, blacklist the already installed 8192cu driver and install a new one. Not this time. ifconfig shows the wlan0 interface and iwlist wlan0 scan can be used to scan for available Wifi access-points, without any firmware installation or driver updates.

All what’s needed to do to connect the Raspberry Pi to a Wifi Network, is to add a network configuration to /etc/wpa_supplicant/wpa_supplicant.conf.

The network configuration depends very much on your network, SSID, Password Security etc. However, here is what I have added, to make the EW-7811Un connect to my WiFi network:

With the correct WiFi network configuration added to the wpa_supplicant.conf file, the ethernet cable can be removed and the Raspberry Pi will automatically switch over to WiFi.
This behavior is pre-configured in /etc/network/interfaces, which looks something like this:
auto lo

Once done with setting up Raspian, I usually create an backup image that later can be copied onto the same or a different SD Card (of equal size).

Insert the perfect SDCard into the Card Reader and find out how to address it. Again, for me that usually is disk2s1.
sudo diskutil unmount /dev/disk2s1
sudo dd bs=1m if=/dev/rdisk2 of=~/RASP_3_2_27.img
sync
sudo diskutil eject /dev/rdisk2

Depending on the size of the SDCard, this will create a huge file (like 16GB) an may take a while (like 7min).

Insert am empty SDCard into the Card Reader and find out how to address it. Once again, for me that usually is disk2s1.
sudo diskutil unmount /dev/disk2s1
sudo dd bs=1m if=~/RASP_3_2_27.img of=/dev/rdisk2
sync
sudo diskutil eject /dev/rdisk2

No comments yet
raspberry pi wifi