It wasn’t Steve Jobs, but former Apple Computer CEO John Sculley, who in his book Odyssey: Pepsi to Apple, introduced us to the Knowledge Navigator, an astoundingly capable virtual assistant. Today, more than thirty years later, smart speakers are trying to implement at least some of the conversational concepts, envisioned in the Knowledge Navigator video, which premiered in 1987 at Educom.

According to Canalys, 75 million smart speakers will be sold worldwide in 2018. Amazon Echo and Google Home devices have a market share of about 30% each and more than 50% of all devices are sold in the US.
According to dashbot, 75% of those who own a smart speaker use it daily, with 57% using their device many times a day.

Obviously, a smart speaker is no Knowledge Navigator, at least not yet. Listening to music, asking for weather information, and setting a timer are the most popular use cases. It’s doubtful that consumers spent a significant amount of time and effort, evaluating competing experiences, but instead go with the platform they are already invested in. Even so, imagine a level playing field, how would one decide?

Voice first or voice only experiences don’t have a traditional (graphical) user interface. In this new environment of ambient-computing, neither form factor nor looks matter. All other things being equal, it’s how a user perceives a response that might eventually determine the success of a voice platform or that of a skill or application running on one of those platforms. Not only what, but equally how a virtual assistant says it, will determine success.

Likability becomes the ultimate differentiator in an otherwise un-differentiable experience.

Creating a likable experience doesn’t mean that a virtual assistant should aspire or pretend to be human. You also don’t need to hire novelists, poets, comedians, and fiction writers, trying their very hardest to build personality quirks into the most mundane or rote activities. Simply put it is about making a connection with the user.

Currently, smart speakers are more like digital slaves, only allowed to speak when spoken to. Regardless, reading or hearing a kind response can be a delightful experience. But rather than being kind, it is important the intended attitude or sentiment comes across unambiguously. An example not to follow would be this response from a virtual assistant inside a maps app, announcing not with empathy but gleefully with obvious happiness in her voice:

“There has been a fatal accident on the 101 North. You will arrive at your destination in two hours and fourteen minutes. You are on the fastest route.”

Mistakes like that can easily be avoided, by matching the emotions and tones found in the text, with those recognizable in the voice.

Paul Boersma, professor of Phonetic Sciences at the University of Amsterdam, (and author of the leading speech analysis software Praat) created a system that measures from voice input, whether the speaker sounds happy, sad, afraid, angry, or has a neutral state of mind. It can reach the performance level of a dedicated human listener, even if hearing a speaker’s voice for the first time.
While Boersma’s emotion recognizer was not created with speech synthesizers in mind, nothing prevents us from using it to evaluate synthesized speech. 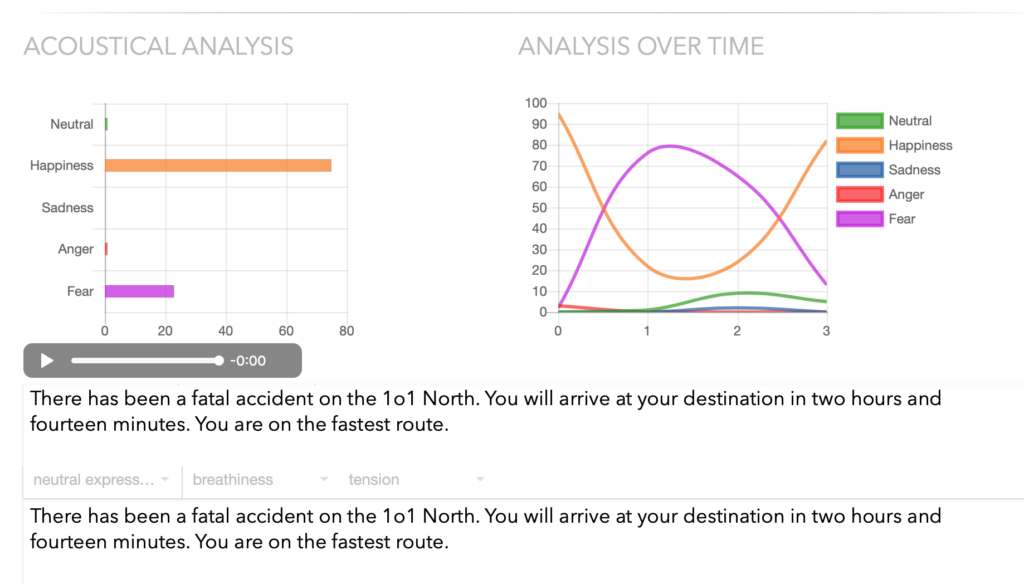 Changing stress and intonation by varying prosodic parameters for pitch, pitch range, volume and speech rate, can change how emotion in synthesized speech is perceived. A pitch increase, for instance, could be used to inject emotions with high excitation (anger, fear, and happiness), while a pitch decrease, or a narrowing of the pitch range is an option for emotions with little excitation (sadness or boredom). We tend to say positive things faster while slowing down at negative information.

SSML Version 1.1 is an W3C recommendation since September 2010, but there still isn’t a single synthesizer that has implemented the entire specification. Moreover, the results of the already implemented features vary. Still, SSML allows us to adjust the speech synthesis, for instance, permitting to control emphasis, pitch, pitch-range, speaking rate, and volume of the speech output. 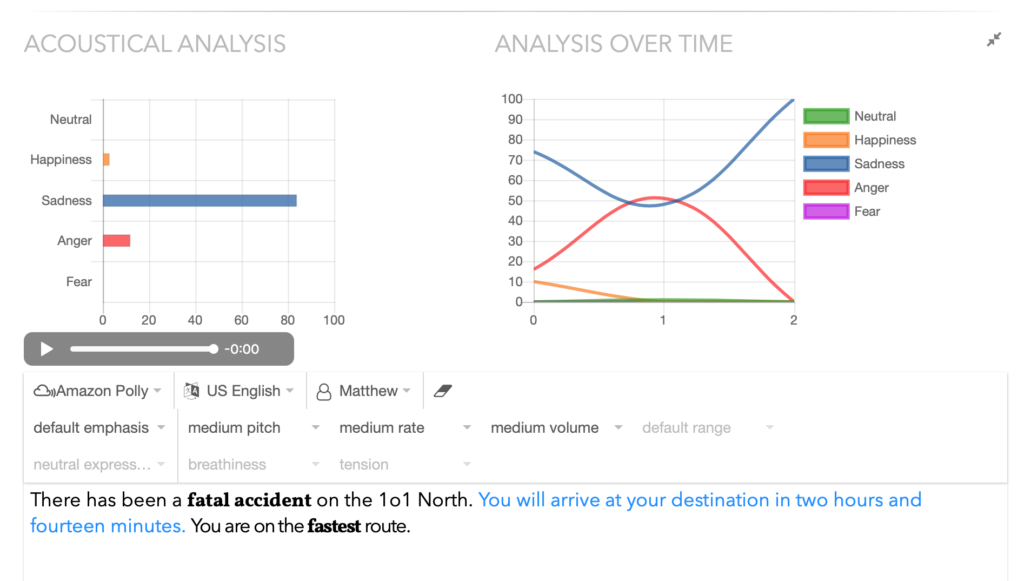 But long before diving into the cumbersome process of adjusting the perceivable emotion in synthesized speech, comes the task of finding the right tone in a text or script.

Emotions and Tones in Text

Before diving deeper into the sentiment of sentences, or the pleasantness, activation, and imagery of isolated words, let’s look at three sentences, all saying pretty much the same thing, but expressing a different attitude, maybe reflecting the attitude of the writer or speaker.

Which of these similar sentences is most likable? Which best expresses the emotion the author wishes to convey? We have developed tools to help with these questions.