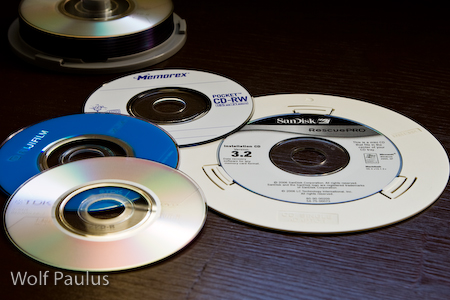 Even before writable mini disks, the 8-centimeter in diameter small CDs and DVDs (a.k.a Pocket-CD), became available/affordable, I really liked that small form-factor. Today you find mini disks included with some computer accessories, used as a cheap way to include drivers and other software. Some video cameras use writable mini DVDs for content recording. However, I don’t think those small silver optical disk became very popular ever and the rise of the slot loading drives surely didn’t help.

It used to be that only on Apple computers one would predominately find slot loading optical drives (CD and DVD drives) while on PCs the less expansive but often faster tray loading drives were used. Generally, slot loading drives seem to be more convenient and offer a very clean look but are also more prone to jamming; most importantly however, slot loading drives don’t accept 3&quot; mini DVDs or Pocket CDs and Apple warns about using those.

Warning: The optical drive in your Mac mini supports standard circular 12 cm discs. Irregularly shaped discs or discs smaller than 12 cm are not supported. Noncircular or small discs may become lodged in the drive.

In the past I have frequently used Pocket CDs, which have 210 MB or 24 audio-minutes of storage space and also Mini DVDs, which have 1.4GB or 33 video minutes of storage space. These 3-Inch CDs and DVDs are quite cool, easy to carry and due to their small size also very easy to ship. The disks are much harder to crack and they also fit nicely into a regular mailing envelope.

Considering an AppleInsider report about a patent applications filed by Apple, concerning different 8 cm to 12 cm optical disk adapters, it looks like Apple finds those smaller disks convenient as well. However, there really is no need to wait for Apple to ship such a thing, with a little luck you may be able to pick up a Mini CD Adapter from Philips or Memorex.

I admit the Memorex model looks somewhat fragile and I’m sure that there is a reason why it’s sold in packs of three.

We have tested the Memorex Mini Disk Adapter in an iBook, a PowerBook, a MacMini G4, a Mac Mini Core-Solo and a Mac Mini Core-2-Duo. It worked perfectly fine in all Macs but the Core-2-Duo Mini. However, it’s not the Mac Mini but rather the DVD-RW drive, which is to blame here.
Meaning, the adapter worked fine in these drives:

but did not work in

Unfortunately, this doesn’t seem to be the only problem with the Pioneer DVR-K06 drive. This page for instance has recent reports on Pioneer DVR-K06 reliability issues, and there seem to be plenty of those. While Pioneer has discontinued this obviously flawed product, it’s still available at retailers and also in currently shipping products like the Mac Mini.
Just by looking at the small number of Macs I have access to, I found CD-RW and DVD-RW drives from Matshita, Pioneer, and Panasonic and it looks like that Apple buys the least expensive instead of the best and most reliable drive. Maybe Apple really is the new Dell.

We also tested the adaptor in a Sony CD player and an AVEX DVD player. The CD and DVD player had regular horizontally deployed tray loading drives and an adapter would not have been necessary, however, a mini CD put into the adapter played perfectly fine in both devices. 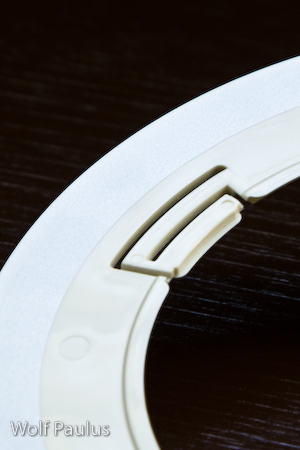