The Servlet 5.0 specification is out and Tomcat 10.0.x does support it. Time to dive into Tomcat 10.

Tomcat 10 requires Java version 8 or later and since OS X 10.7 Java is not (pre-)installed anymore. Let’s fix that by installing a Prebuilt OpenJDK Binary. Easy to follow details about how to install OpenJDK are available here. Anyway, after opening the Terminal app,
java --version
hopefully shows something like this:

Whatever you do, when opening Terminal and running ‘java –version’, you should see something like this, with a version of at least 1.8.x Again, Tomcat 10.0.x requires Java 8 or later.

sudo
sudo is a program for Unix-like operating systems, allowing you to run programs with the security privileges of another user (normally the superuser, or root). Since we are creating directories, outside of your home folder, administrator right are required. I.e., when executing sudo you will be asked to enter your password; and your Mac User account needs to be an ‘Admin’ account.

Starting Tomcat by executing the provided scripts, like so:
/Library/Tomcat/bin/startup.sh

Finally, after your started Tomcat, open your Mac’s Web browser and take a look at the default page: http://localhost:8080 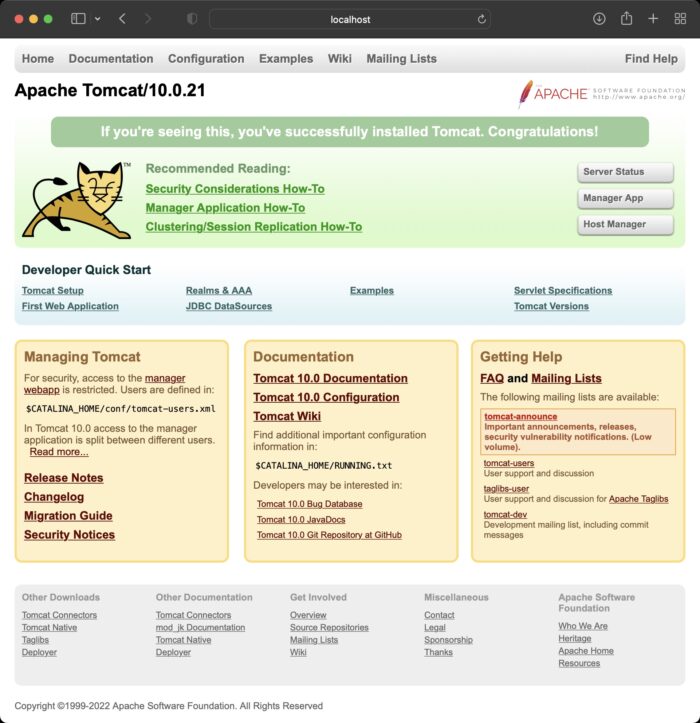 Stopping Tomcat by executing the provided scripts, like so: