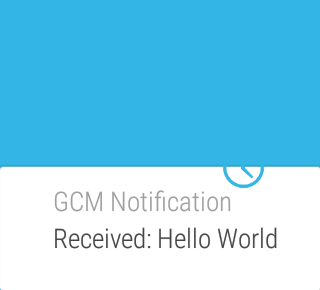 In the new world of micro-services and micro-applications, push notifications are an important and sometimes even the exclusive way to get information to mobile/wearable applications.

The term Micro Application is not fully established yet. I use it here to describe an application that is deployed on a mobile or wearable device with the purpose to receive notifications, issued from a remote (software-)sensor. Should the sensor also be available wrapped in a service, then the micro-application may also take the initiative and send a request.
More importantly however, if a received notification is actionable, the micro-application implements action-handlers and accepts user input that triggers those handlers.

To reach mobile devices running Android, Google’s Cloud Messaging Service is probably the most reliable, scalable, and certainly the most economical way to send push notifications. Each notification can cary a payload up to 4KB and the service is absolutely free, no matter how many notifications are sent. Since Google’s service can bundle messages from several senders targeting the same device, it is also economical with regards to battery and network usage on the mobile or wearable device.

Newly added features include that the GCM Service cannot only push to Android devices, but also to iOS devices, and to Google Chrome browsers running on the desktop. Another new feature in Google’s Cloud Messaging Service is Topic Messaging. From the server side, sending messages to a topic is very similar to sending messages to an individual device. The app server sets the address to /topics/myTopic. Topic names don’t clash, since the HTTP POST request also contains the GCM API-KEY, thereby making them unique to the app. Expect up to 30 seconds of delay before the GCM Connection Server returns a success or failure response to the topic send request.

Using the sign-up process at //developers.google.com/mobile/add?platform=android you can request to add cloud messaging to an already existing project (app), or to a new project. Here for instance, I created a new project ‘PushDemo’ and declared the package name, which I intended to use, when implementing the Android mobile app. In the following step, I selected and enabled the ‘Cloud Messaging’ service. The project configuration that was created or modified during the signup process, can be edited later, by logging into the Google Developers Console with your google account (e.g. gmail address). The PushDemo project for instance show up like this: 2. Writing an Android app, receiving notifications and displaying them on a paired Android Wear watch. The Android client app consuming and reacting to an incoming push notification, needs be be built with the Google Play Services SDK, which was added as a dependency in the app-level build.gradle. The most minimal AndroidManifest.xml for an app, would look something like this:

Besides the main activity, the AndroidManifest declares required permissions, a BroadcastReceiver, and three local services, i.e. other applications cannot invoke or interact with them.

Since the Android client application should be able to receive notifications, even when it’s not running in the foreground, it needs to provide a BroadcastReceiver that captures and acts on incoming push notifications. For that we can use the ready made com.google.android.gms.gcm.GcmReceiver and providing it with the intent-filter shown in the AndroidManifest.
If the received intent’s action was “com.google.android.c2dm.intent.RECEIVE”, the BroadcastReceiver will call startWakefulService with that action. However, if the received action was “com.google.android.c2dm.intent.REGISTRATION”, it will call startWakefulService with intent.setAction(“com.google.android.gms.iid.InstanceID”);

For both of these actions, we implement a service, like declared in the AndroidManifest above.

Like mentioned above, the RegistrationIntentService gets called to generate an security token. The instanceID.getToken(..) call generates the token, sending the the “defaultSenderId” and “INSTANCE_ID_SCOPE” as parameters back to the GCM Server. It’s not immediately obvious, but the defaultSenderId is the GCM project_number, which is magically inserted into the app’s resources (originated in the google-service.son file of course) and the the INSTANCE_ID_SCOPE is just a String (“GCM”).

This token, in the context of GCM also known as the registration token, is needed to be stored on the app-server and is used to send a message to the device.

The code also show how to subscribe a registration token to a topic, unsubscribing works the same way. However, the whole topic string must match this regular expression /topics/[a-zA-Z0-9-_.~{cf84f64b719aa4202be1a86aa21fff6d84c0a4ff2829b0c72a6f2ccecf360e53}]{1,900}  basically saying that a topic name can be between 1 and 900 characters long and only contain letter A to z and a very few special character, but no spaces.

The server component of the push notification solution is necessary, because it will send the notifications (containing the payload) to Google’s GCM server. Also, Google’s server may request a re-sent, which our server must be able to respond to, and it also plays a role in the user device registration process.

A Google cloud message can be send-to-sync a.k.a. collapsed, where each new message replaces the preceding message, or as message with payload a.k.a. non-collapsible message, where each individual message is delivered. In this example, I will only use messages with payload, using an HTTP connection server.

The gcm-server contains the core server implementation, and the Java Web application related implementation can be found here: ~/gcm/samples/gcm-demo-server.
The following steps will create a deployable WAR file. However, before building it, copy your previously created API key into this file: ~/gcm/samples/gcm-demo-server/WebContent/WEB-INF/classes/api.key

Running the project locally in Tomcat may look like this: And here is the project view in IntelliJ: With all components implemented and deployed, we can now install the mobile Android app on a phone, and once it’s launched for the first time, the server component should show a registered device like so:

So now that we have sent a notification to a specific Android phone, we have to revisit the Android phone application again, to interpret and act on the received information. In the GcmIntentService, we use the incoming information, to populate a new android.app.Notification, which also gets decorated with Notification.BigTextStyle().
Finally, we use the NotificationManager to send the newly created notification with the notify method, which will make it available on paired Android Wear watches. All this may sound involved and complicated, but it opens up incredible opportunities. I think it was back in 2009, or maybe even earlier, when I gave a talk titled “Turning the Web on its head – let’s have the Server call the Client“, which covered Comet-style protocols. GCM and push notifications allows us to do this easily and economically. However, to address or segment push targets efficiently, you may have to add additional information, when the client registers with the Java server component.

Here is the sendRegistrationIdToBackend() method that is used in the demo project, for instance sending a userId inform of an email address, acquired  from the AccountManager, back to the server.