San Diego’s Diggnation fans were in for a treat this Friday, when Diggnation Episode 55 was taped in front of a live audience at the La Jolla Brew House.
Thanks to the Comic-Con Convention, which is also happening his weekend at the San Diego Convention Center, the whole crew, including Kevin Rose,

Alex Albrecht, Keith Harrison, David Prager, and Jay Adelson showed up.
Taping took place in a back room at the brew-house, in front of what must have been the biggest diggnation live audience yet. Spotted in the audience were some very special guests, including Alex’s grandparents and Posh from the suicide girls. As always, the guys were really funny and the crowd almost exploded when Johnny Johnny from the TikiBar podcast made a brief appearance, serving some hight voltage beverages. 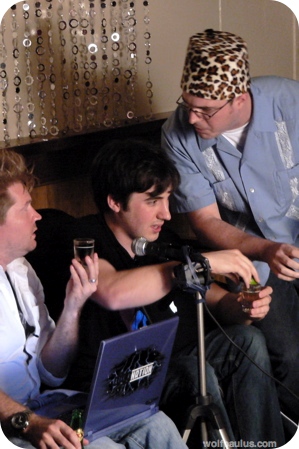 Share on LinkedInShare on Email
No comments yet
digg