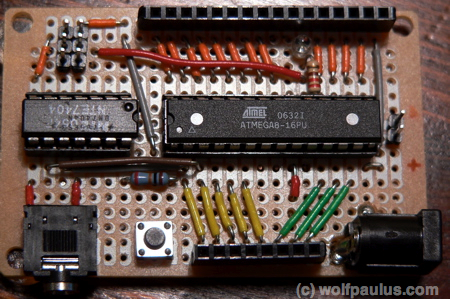 Considering the already low price of the Arduino board, building an Arduino-like board yourself probably doesn’t save you any money but is certainly a fun and education project to do.
I tried to make the simple board even simpler, by using a Serial instead of an USB Port, the ATmega’s internal clock instead of an external crystal, and requiring 5 VDC instead of providing any kind of power regulation. However, my board does expose the 6 header ICSP, equivalent to the one available on the original Arduino NG Board.
RadioShack’s Multipurpose 417 Holes $1.79 PC Board (Model: 276-150 Catalog: 276-150) built a great starting point for this electronics project, which was obviously inspired by Tom Igoe’s ‘Arduino Breadboard‘.

After soldering the components onto the board and checking all joints, it was time to put the Arduino bootloader into the Flash Ram, which raised a couple system / software related questions I hadn’t thought much about before:

Let’s address the last question first and take a look at the fuse bytes. The content of those fuse bytes persists reprogramming of the Flash memory and almost every bit in those fuse bytes represent some kind of status setting that configures the microcontroller, for instance to work in concert with other components on the board. Oddly enough, for all fuses ‘1’ means unprogrammed while ‘0’ means programmed.

Looking at my slightly reconfigured Arduino board, I chose the following fuse settings:
High Fuse: 0xDA and Low Fuse: 0xD1, which leaves the ATmega’s Oscillator options at their defaults while allowing the use of the EEPROM and also sets the boot size and boot vector like needed for the Arduino bootloader.

This brings me back to the other question:

How to address the speed difference, to keep software changes to a minimum?

The frequency the ATmega chip is running at, is hardcoded into the bootloader (ATmegaBOOT.c or ATmegaBOOT_168.c). While it is a configuration parameter in the Makefile, putting a bootloader on an Arduino-like board that does not run at 16.0MHz requires adjusting the Makefile and rebuilding the bootloader.
The best place to get Makefile and bootloader source for the ATMega8 is http://svn.berlios.de/viewcvs/arduino/trunk/bootloader/ the same for the ATmega168 can be found here: http://webzone.k3.mah.se/projects/arduino-workshop/upload/default.asp?folder=40

For completeness, here are the ATmega 168 fuse bytes, (a couple bits more a.k.a. ‘Extended Fuse Byte’, compared to the ATmega 8).